Upper Mustang Trek is undoubtedly the compact package of geographical diversity offering a high level of adventure. Besides, it holds a unique history that attracts more visitors supplemented by Tibetan culture and Buddhism's importance. Initially, Upper Mustang was isolated till 1992 and later started to welcome foreigners to its land. So, Upper Mustang allows visitors to explore and identify the uninfluenced culture of Upper Mustang.

Upper Mustang is distinctively surrounded by mountains like Annapurna, Dhaulagiri, and Nilgiri which creates invincible temptation. The travelers move along with the Kaligandaki River allowing them to cherish the green forest, a fast-flowing river leading to the barren land accompanied by mountains. Additionally, Upper Mustang lies on the Tibetan border which influenced local culture so the popular village of Upper mustang is still termed as Lo-Manthang which means kingdom in the Tibetan language. There are numerous Buddhist monasteries and nunneries, built-in stiff cliffs crafting the place with colorful prayer flags. Various caves are also formed. Through the shades of pink, grey, and brown colors the barren hills portray the tale of demon and lama. During the Upper Mustang trek, you need to trek through the highest altitude of around (4353 m) through the altitude of the Upper Mustang is 3700m. The overall weather of this trek is chilly and windy and hike through the barren hills and unspoiled surroundings.

Decorated by barren land and hillocks accompanied by the world’s highest peaks Mt. Dhaulagiri and Mt. Annapurna, Upper Mustang is mesmerizing leading to a distinct world. Being in Upper Mustang, one can explore Tibetan culture and lifestyle along with the tales of demons and Buddhist priests explaining the various shades of hills over there. The stiff cliffs give eye-pleasing views along with unpolluted caves. The fast-flowing Kali Gandaki river throughout the Upper Mustang trek demonstrates the scenic picture of the river following straight from the mountains.

Nepal adventure team has a well-organized package for 17 Days Upper Mustang Trek which starts from Kathmandu allowing visitors to prepare as well as enjoy Kathmandu. The next day leaves for Pokhara to reach Jomsom and begin the hike to Lo-Manthang (Upper Mustang) through Kagbeni. 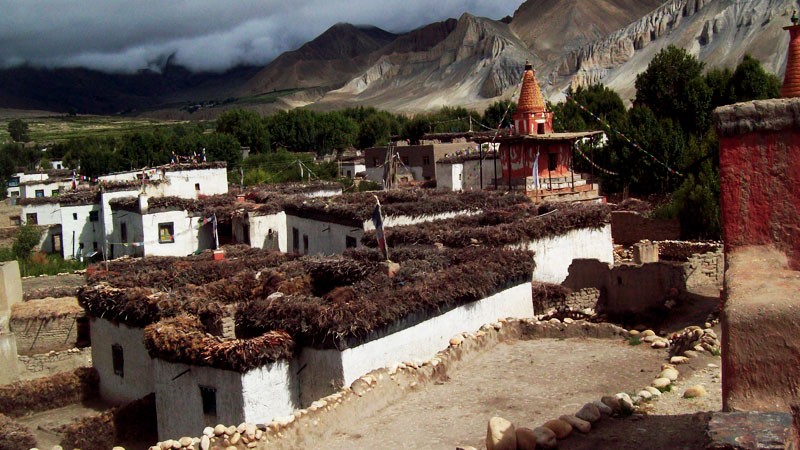 The departure is fixed as per the itinerary. Besides, departure can be adjusted as per requirement.