Annapurna Base Camp trek, the second most popular trek in Nepal is known for its diverse flora and fauna and rich culture and traditions. Annapurna Base Camp trek at an elevation of 4130 m, gives a perfect platform to view the Annapurna Massif. ABC trek is perhaps the best trekking destination that offers such majestic 360-degree views of the mountain ranges, rich biodiversity, and cultural integration all at once.

Throughout the Annapurna Base Camp trek route, you will walk past thick, lush forests, meadows, and long bridges. The unique terrains of ABC trek are almost fascinating. One day you will walk through stone steps beside dense forests while the other, you will step to a snow-blanketed mountain range with no plantation around. Annapurna base camp offers the chance to intermingle with the Sherpa, Magar and Gurung community living in the villages of Dovan, Deurali, and Chhomrong. The ethnic groups' people are warm and welcoming. Annapurna Base Camp height at 4130m shows the livelihood of the ethnic communities residing in the Annapurna Region and relying on Annapurna for their day to day life. Annapurna Base Camp trek is best for the views of Annapurna Range, Mt. Dhaulagiri, Himchuli, and Mt. Machapuchrey. 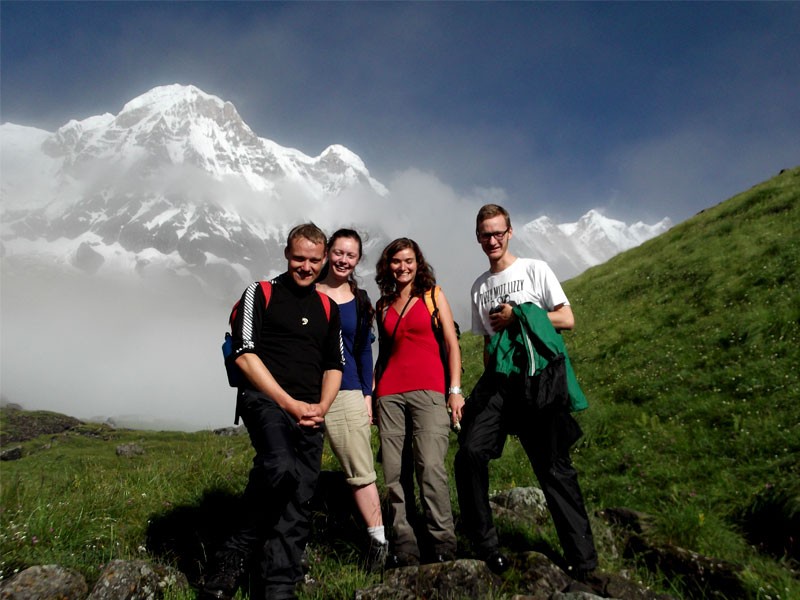 The views from Annapurna Base Camp height are surreal. Most of the top Annapurna ranges are seen from the base camp. Moreover, the views of Mt. Macchapuchre and Himchuli add a spark to the entire trek. Even at that elevation, the ethnic communities of Magar, Gurung, and pre-dominantly, Sherpa are living their life in perfect harmony with the cold and beauty of Annapurna. The communities rely on tourism from the Annapurna Base Camp trail. At the elevation above 4000m, you will find a couple of tea houses that serve major facilities to visitors.

Annapurna Base Camp distance from the city of Pokhara is 37 km. The trek starts from Nayapul at an elevation of 1070m. From there, we head to Ghorepani at 2840m, and this is when the temperature begins to drop. At 3230m altitude, Deurali is the closest settlement to Annapurna Base Camp. Finally, Annapurna base camp elevation at 4130m is the destination of the ABC trek. The trek back takes you to the same route. The entire Annapurna Base Camp trek takes around 13 days to complete and is a package of fun and adventure. 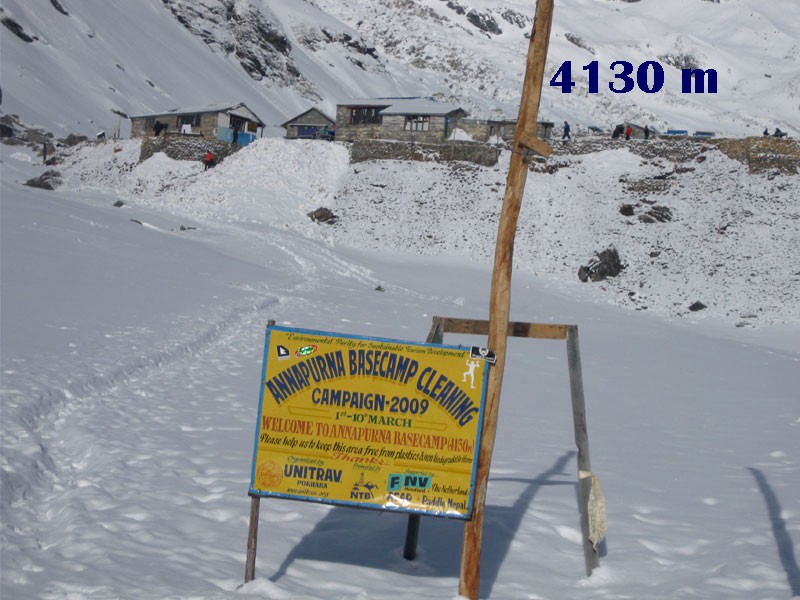 Annapurna Base Camp trek elevation brings a few difficulties. Altitude sickness is a common challenge in treks that take you to a height above 3000m. For avid trekkers, this is just another trekking destination, however, for amateur trekkers and casual visitors, accommodating to this elevation can be very difficult. Since Annapurna Base Camp trek elevation reaches 4130 m, which is well above 3000m, trekkers can experience mild Altitude sickness. Some of the very first symptoms of Altitude sickness are trouble sleeping, dizziness, tiredness, vomiting, and extreme headaches. Thus, one should be aware of these symptoms that the body shows.

Another major challenge caused by Annapurna Base Camp height is that the body cannot easily digest protein and fat. Hence, you need to be rightfully aware of the types of food to be consumed and not to be consumed. Mainly, meat products and alcohol are not meant to be consumed at such a height.

The trekking trail at such an elevation above 3500m means that there are no plantations, and the air becomes thinner. Due to the less oxygen in the air, it might be difficult to breathe. However, this is not so common.

The weather at Annapurna Base Camp trek elevation is cold most parts of the year. From late spring to winter, the ABC region experiences snow from 1 foot to 4 feet of snow. The best season to go on Annapurna Base Camp trek is in the spring season when the temperature is good and clear views are seen. There are no frequent changes in the weather, so you can expect timely sunshine and clear sky. In winter the temperature can drop negatively, freezing the entire path along the way. Annapurna Base Camp Trek solo is suitable for those seeking to go on a soul searching tour. However, it is wise that you take this route in the peak season since there are other trekkers in the way. In the winter season, only a few trekkers head to Annapurna base camp; because of the heavy snow, there are chances that the trail may disappear, and a solo trekker might lose their way.

Apart from these basic challenges, Annapurna Base Camp trek is enjoyable, do-able, and adventurous.

Annapurna Base Camp vs. Everest Base Camp Elevation 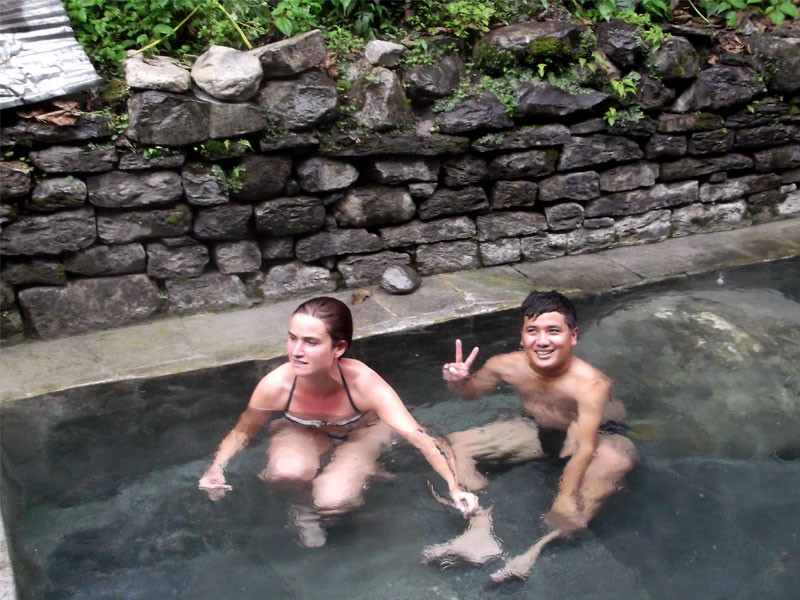 How to prepare for Annapurna Base Camp Trek? 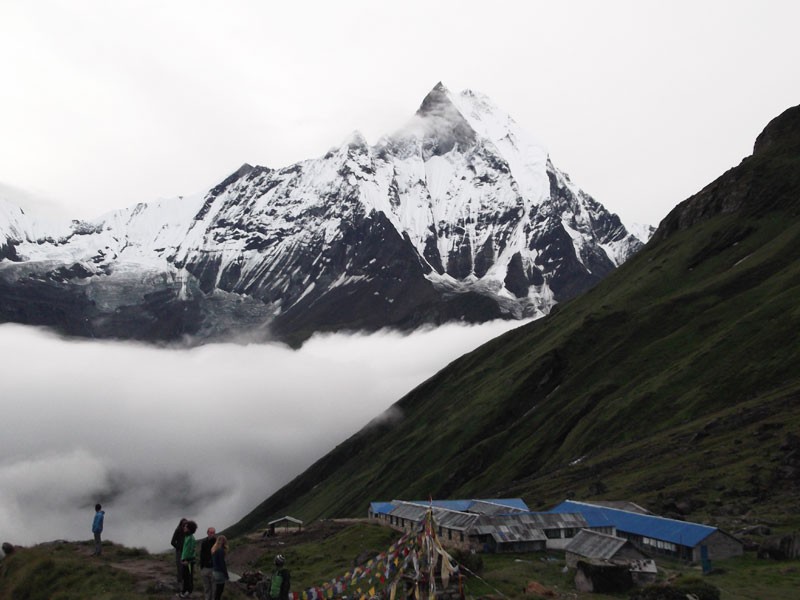