Lukla Airport is at an elevation of 9334 feet/ 2845m located at Solukhumbu district, Nepal. Lukla Airport was built in 1964 under the direct supervision of Sir Edmund Hillary. In 2008, Lukla Airport was renamed as Tenzing- Hillary Airport in the honor of Sherpa Tenzing Norgay Sherpa and Sir Edmund Hillary, the first people to have reached the summit of Mount Everest, the world’s highest mountain, and also to mark their efforts in the establishment of an airport in Everest Region. Lukla is the only gateway to Everest Region where there is no road services and the options: ride to Jiri town and climb uphill for 5 days to reach Lukla or pay in four figures for a private helicopter shuttle which is much comfortable and easier.

Lukla Airport is widely popular as it is the only gateway to Everest Region Trek. There are daily early flights between Lukla and Kathmandu operated by 4 Airlines. When the weather is clear, the flights also take off afternoon whereas the unclear weather (high winds, cloudy, changing visibility) results in delay for hours and days. Lukla Airport is contained within a chain-link fence and patrolled by Nepal Armed police or civil police around the clock. 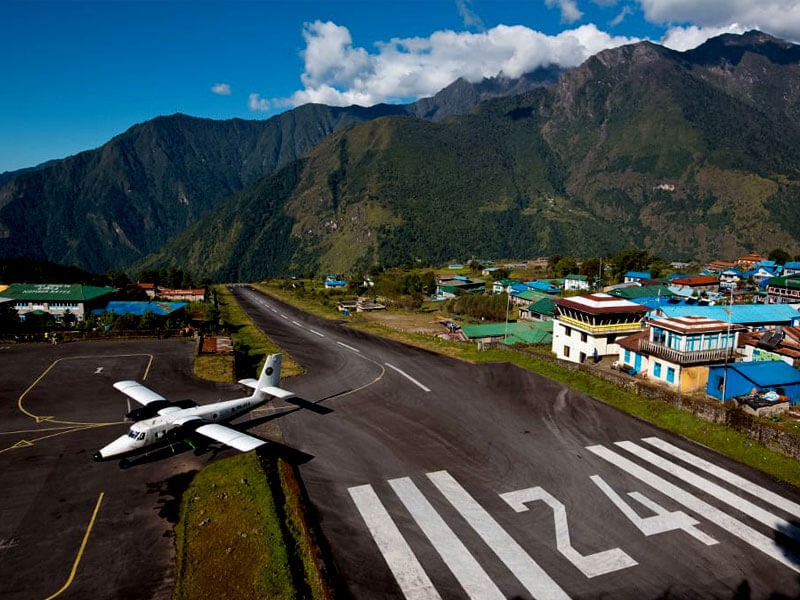 Why Lukla Airport is the world’s dangerous Airport?

Not to mention, Lukla Airport is regarded to be one of the world’s most dangerous airports due to its natural setting like surrounded by mountains at a high altitude of 1729ft / 2845 m with low air pressure and air resistance. Thus, only helicopters and small fixed-wing planes are permitted to land. The short runway is resting on a little mountain shelf where one end is a wall and the other a steep drop into the valley below. To overcome the short runway, Lukla Airport has about 12% slopes uphill to assist planes in slowing down in time. Henceforth, only experienced pilot with at least 100 STOL (Short Take-Off and Landing) experiences, one year over of STOL experiences in Nepal, and 10 flights into Lukla accompanied by a certified pilot is allowed to fly to Lukla Airport. The small aircraft carries up to 16 passengers with 22 pounds/ 10 kgs per passenger. The flight cost varies as per the season and on average you can have a round trip in USD 360/300 (Foreigners/Indian).

Lukla Airport in Nepal’s busiest domestic Airport as travelers all around the globe fly to trek in Everest Region, climb the peak and ascend the mountains including Everest. The options to Lukla Airport are either to ride to Jiri town and hike uphill for 5 days to Lukla (trekking route used by Sir Edmund and Tenzing, Jiri- Everest Base Camp Trek or pay in four figures for private helicopter transfers (comfortable and easy).

Lukla Airport is one of the most charming airports in the world due to its unique setting. Lukla Airport is situated in the Himalayan Region of Nepal. The runway is on the hill surrounded by other high hills, snow-capped mountain waving at visitors, the bells clanging on yaks spreading soft tunes and the relaxation from the chilly breeze leads to a unique experience on could only feel in storybooks.

Unlike the large and fancy airports with equipment and facilities, it is tiny with 5-6 booths as a counter, a small waiting room decorated with pictures of the Everest Region, 2 shops, no treadmill, and a mandatory washroom. But the window views of the Airport’s waiting room make the waiting easier, pleasing and do not fail to awe. The few small crafts parked, short runway and people running in the compound feels like you have entered a wonderland of the miniature. The ting-ting sound of giant yaks wakes you up from the wonderland of miniature and welcomes you to the world of Lukla, the gateway to the Everest region. Lukla is a small town with no other road services where yaks, ponies, and porters are used as the means of transportation.

Travelers separate a day to explore Lukla while visiting Everest Region as they find it charming. The tiny village of fewer than 500 people is the most popular starting point of Everest Region Trek if the plan is a two-week trek to Everest Base Camp, Nepal Peak Climbing, or 45 plus days to Everest Summit. For the trekking packages and plans in Everest Region or other Trekking in Nepal, you can check out the website of the Nepal Adventure Team.

Lukla is the only spot besides Namche Bazaar with banks, various stores, equipment stores, cyber café, and currency exchange counter in the Everest Region. You can purchase things that you have missed to bring either in Lukla or Namche Bazaar as there won’t be any stores in the trail ahead. However, energy bars (like snickers, mars), chips, cold drinks are available in the tea house lodge.