Tengboche Monastery (Thyangboche or Dawa Choling Gompa) is the largest monastery of the Khumbu region at an altitude of (3,867 m / 12,687 ft). Tengboche Monastery is perched on a hill at the confluence of Dudh Koshi and Imja Khola rivers with a stunning backdrop of Mt Ama Dablam along with the panoramic views of different mountains as Everest, Lhotse, Nuptse, Tawache. It is a Tibetan Buddhist Monastery that holds the high values for the Sherpa community and Buddhists.

History and Legends of Tengboche Monastery

Khumbu valley is believed to be influenced by Buddhism about 350 years back. Ancient scriptures of Tibet refer to Khumbu valley along with Rolwaling and Khanbalung valleys as sacred places. Lama Sangwa Dorje was a person with divine psychic knowledge and prophet vision who is regarded as the founder of the oldest monastery at Pangboche, Khumbu as well as other small hermitages along with Tengboche Monastery. The footprint of Lama Sangwa Dorje while meditating on a rock was the basis for the establishment of Tengboche Monastery. 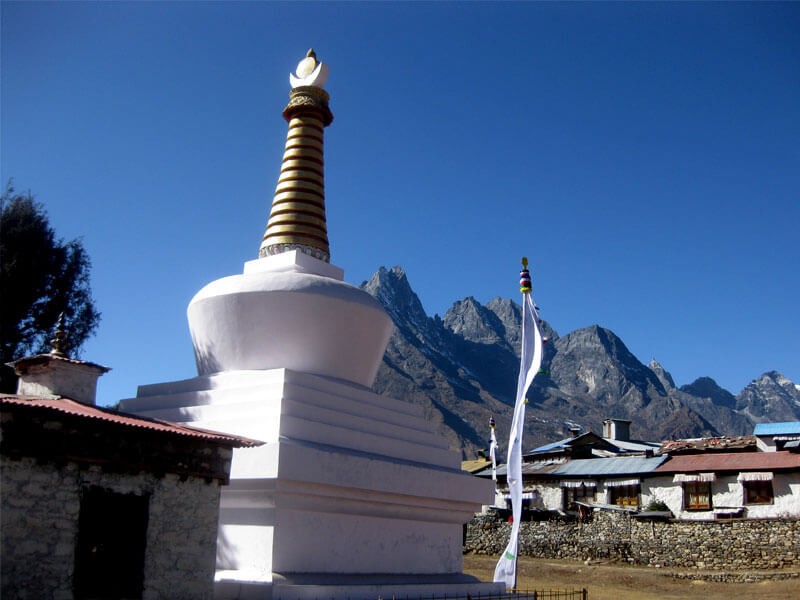 Further, Ngawang Tenzin Norbu, 5th incarnation of Lama Sangwa Dorje, blessed Lama Gulu to construct Tengboche Monastery. Lama Gulu was the first person to built Tengboche Monastery under the Nyingmapa lineage of Vajrayana Buddhism. Vajrayana Buddhism provided its teaching to everyone without discriminating on the basis of gender. Initially, Tengboche Monastery was built in 1916 but faced disasters like earthquakes and fire in 1934 and 1989 respectively. However, the belief of people (not just locals but the visitors too) on Tengboche Monastery made it stand strong and still to date. It was timely reconstructed and renovated with the support of heartily locals and foreigners including Sir Edmund Hillary and American Himalayan Heritage Foundation, Himalayan Trust.

Structure and Surrounding of Tengboche Monastery

En route to Everest Base Camp in Everest Region, Tengboche Monastery is popular around the world. Tengboche is the junction of the trail to Everest Base Camp for visitors and climbers of Mt. Everest and other peaks of the Everest Region. These areas form part of the entire Khumbu Region up to the Tibet border. The trail from Namche Bazaar via Lukla Airport to Tengboche Monastery crosses the Dudh Koshi river (3250 m/ 10,660 ft) and ascends to Tenmgboche at 3,870m / 12,700 ft. Then, a downhill descends lead to Devoche, the nunnery.

The monastery is at the confluence of the Dudh Koshi River and the Imja river with the backdrop of high snow-capped bright mountains enhances the beauty of the monastery. There is also a camping area along with a number of lodges outside the monastery. During spring seasons, hill slopes around Tengboche are covered with flowers, rhododendrons and mountains shine brightest during the winter season though you also get an amazing view during peak season; March-May and September – November. 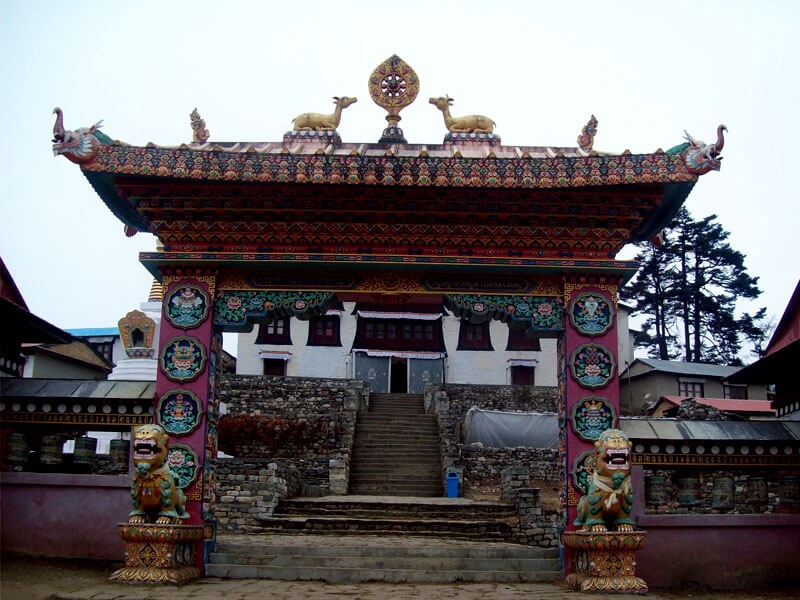 Tengboche Monastery is decorated with mani stones (with inscribed mantras “om mani Padme” ) and prayer flags of five colors (white, green, yellow, blue, red) indicating teachings (purity, peace, beauty, knowledge, love) of the Buddhist religion. The monastery is strengthened with stone masonry where the courtyard and storerooms are large to facilitate the monks’ religious rituals, activities, and practices. Dokhang, the prayer hall, is the main building with a large statue of Shakyamuni Buddha. The travelers visit the monastery to pray and light the butter candles for their better health and safe trek to the mountains.

Sagarmatha National Park, one of the UNESCO World Heritage Sites, incorporates the natural and cultural beauty from high mountains, glaciers, icefalls to rivers, flora and fauna along with the authentic Sherpa culture influenced by Tibetan Buddhists culture. Tengboche Monastery is also located in the Sagarmatha National Park area. Tengboche Monastery also acts as the endpoint of “Sacred Sites Trail Projects” of the Khumbu Region. It is a circular trek inside the national park passing ten monasteries, caves, hermitages, and nunneries in a clockwise direction from Namche Bazaar.

On the tenth lunar month as per the Tibetan calendar, the Mani Rimdu festival is celebrated at Tengboche Monastery. This festival is also celebrated at Thame and Chewang Monasteries of Solukhumbu district. Mani means the part of the chant of Chenrezig and Rimdu/Rildu means small red pills. The red pill is blessed during the festival and distributed to all the attendees. Mani Rimdu lasts for 19 days where the last 3 days are for public celebration and divided into 6 steps: 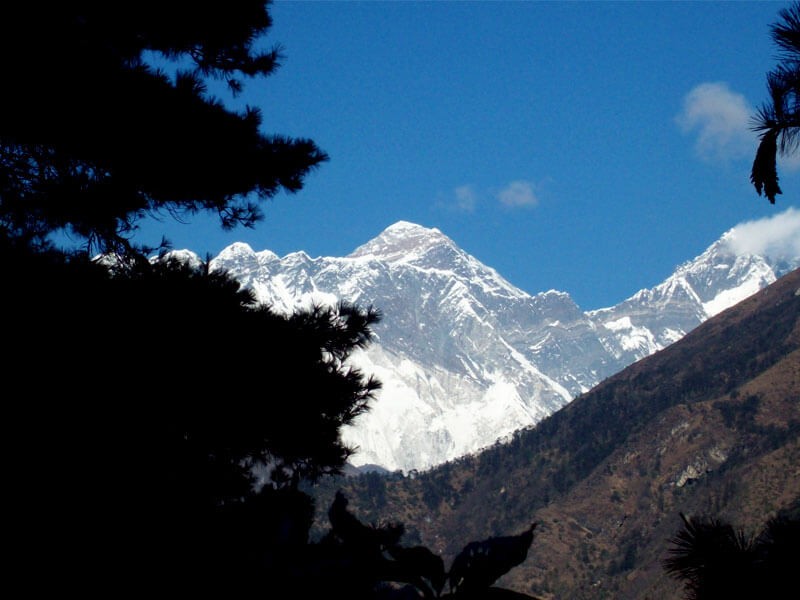