Holi is a religious festival mainly celebrated in Nepal and India. Holi is also known as “Fagu Purnima” as it is celebrated on the full moon day of Phalgun Shukla Purnima every year in March. Culturally important and a religious festival, Holi is not all about smearing colors, splashing buckets full of water, and throwing water-filled balloons at each other, it's also about celebrating the end of the winter and welcoming the new beginning of spring. All age group of people from young to old alike, revelers participate in Holi Festival, in Nepal Holi is more than a festival of colors, it has cultural a significance which lasts for a day.

Holi festival is also celebrated as the perfect time to leave negative feelings like anger and bitterness aside, and smear colors to that person which they have had a cold relationship in the past. For many, it’s a carnival to shower love and joy, meet others, forget, and forgive the past rivalry.

If you are already in Nepal or you are planning to visit Nepal to take part in Holi 2021, then you are in a right place, to begin with. In addition, you can visit our Nepal Festival Tour by clicking the link mention above, where you will be introduced to other cultural and religious festivals of Nepal. 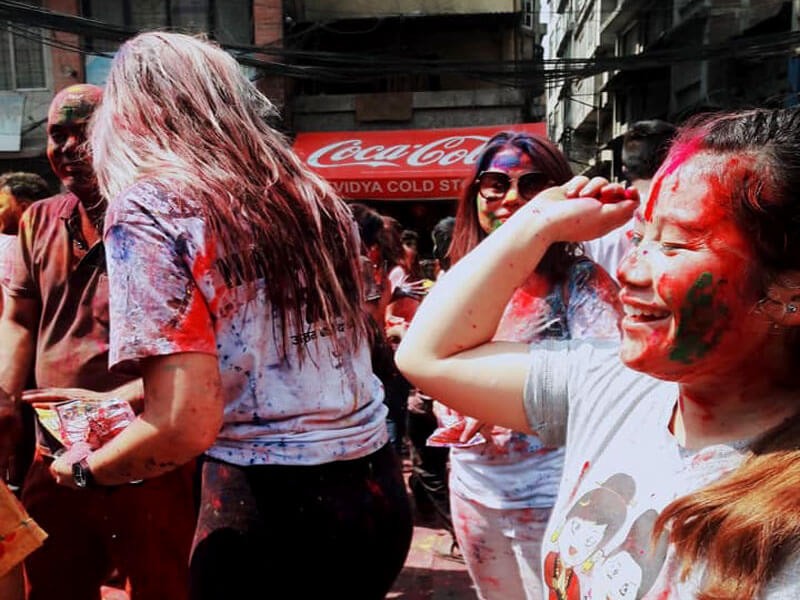 Why Do We Celebrate Holi?

Worldwide known as the festival of colors; Holi marks the victory of good over evil. There are many versions of the story that exist according to Hindu mythology, but the most favored one is about the arrogant and devil king Hiranyakashyap and his son Prahlad, a true devotee of lord Bishnu. Hiranyakashyap, who believed that he was the most superior to all gods and ruler of the universe, forced everybody to worship him. But in his disbelief, his own son Prahlad was worshipping the God Bishnu, a Hindu deity over him, and denied obeying his father’s command. Furiously he threatens his son not to pray to Lord Bishnu but all his effort goes in vain. Finally, he planned a plot with his sister Holika to lured Prahlad onto a burning fire with her in an attempt to burn him to death. Even though Holika had the boon to being immune to fire but Prahlad was saved by his true commitment towards Lord Bishnu and Holika was burnt to ashes. At last, Lord Bishnu took the form of a half-lion, half-man, and killed Hiranyakashyap in order to protect good from evil, and thus, the festival of colors also means victory over evil.

The other story of Holi, according to Hindu Mythology is about Radha and Krishna. Krishna, a Hindu God depicted with blue skin feared to confess his love for Radha because of his skin color. But Radha allowed letting Krishna dye her skin with color and they become a true couple. From then, it is believed that Holi is the time for smearing the colors to love ones and to show love, affection.

When is Holi 2021, and is There any Grand Ceremonial Rituals?

Holi 2021 starts on Sunday, March 28 in Kathmandu valley, along with the hilly region. In the Terai region, Holi begins on Monday, March 29.

The colorful and joyful Holi officially starts in Nepal after the installation of “Chir”, (28 ft tall special kind of bamboo pole fringed with different colors of cloths) in Basantapur Durbar Square. On the day of Holi, the “Chir” is brought down and is pulled towards Tudhikhel to burn. This burning process symbolizes the burning of Holika, also known as Holika Dahan. People celebrate the festival in full energetic mode by gathering in masses, smearing colors to each other, throwing water, and wishing “Happy Holi”. You can see the concert going on, in every little chowk and the streets of Thamel and Darbar Marg. People also organize their own personal Holi party at their house by having feasts and playing cards.

How is Holi Celebrate in Nepal?

In Nepal, people celebrate Holi with overflowing energy like wild and crazy. On the street of Thamel, and near Basantapur or in the Jwalakhel area, you will encounter an energetic crowd of all age's groups with colors on their hand, ready to put colors on you, all in celebration mood, smearing color onto the sky, Holi is celebrated in harmony, unified in one colorful group chanting “Happy Holi”. The best part of this Holi festival is you don’t have to know each other to be part of this celebration just buy a color and roam around the street and you will find yourself in a group.

If you are happening to be in Nepal during Holi, then you should be a part of this celebration. You will have quite a scene of people throwing buckets of water from the terrace and water balloons at each other. But if you do not wish to get wet or get hit by any water bag then you should not participate because Holi in Nepal is loud and wild. Even though you don’t want to participate, it’s okay to get out and just enjoy others watching Holi played and this will be the perfect time to grab some crazy experience for your life because Holi is all about respecting each other's feelings and going wild. 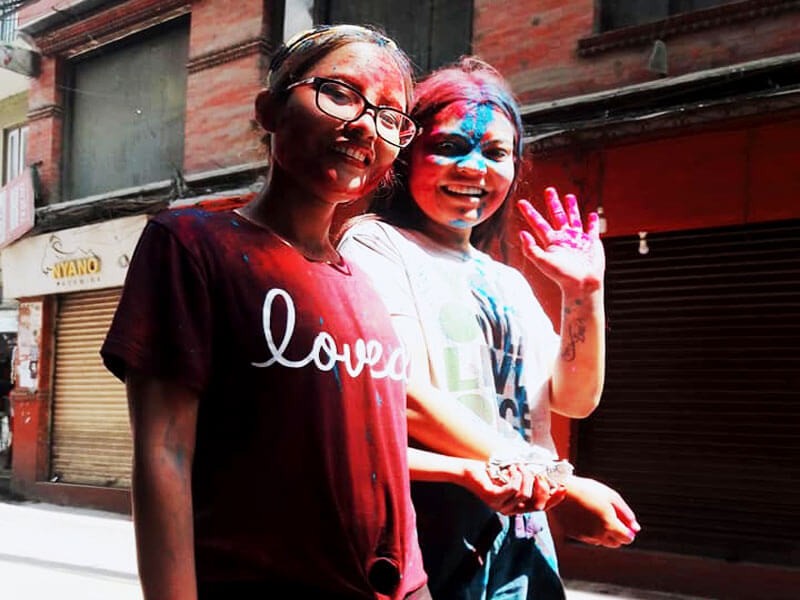 The primary place for the celebration in Kathmandu is Basantapur Durbar Square. You can also take a walk through Thamel streets where you can get the best vibe of Holi with different kinds of people. In New road, Jyatha, Chhetrapati, and various other chowk are the hub for celebration. In Patan and Bhaktapur also, you will find people gathering in chowk willing to play Holi.

Things You Should Know Before Playing Holi

Holi: 2021 is already on your doorstep. Therefore, it is the best time to talk about the things you should be aware of before playing Holi. Previously Holi was played with flowers and natural colors made from flowers and fruits but now the time has changed and the way of playing Holi has also changed. Without knowing the fact that colors contain harmful chemicals and artificial substances which are very harmful to our skins and we put them on our skin directly as a result many of us suffer from skin allergies, irritation, and serious skin damages. Besides that, protect your eyes from colors too. Always try to avoid touching eyes and face during Holi. Thus, don’t be carried away while playing Holi and be safe.

Here are some tips which are going to help prevent skin damages.

If you want to get photographed in auspicious revelry and take a look at the cultural diversity of Nepal, catch Nepal Adventure Team for the Upper Mustang Tiji Festival Trek and Upper Mustang Tiji Festival Jeep Ride Tour starts from 8 May to 10 May in 2021. This annual three-day festival is preferable to those who want to experience a secluded voyage into the isolated area of Lo Manthang. 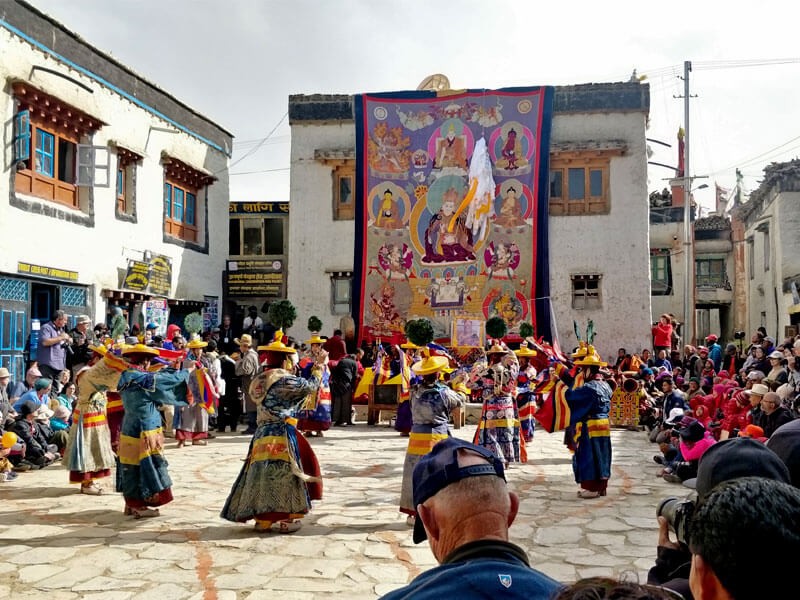 The only company that treats all travelers as one big family, Nepal Adventure Team would like to wish you all Happy Holi in advance.

Have fun and play safe.